Sharing some history of our club - chartered by CCCA in 1956

by Bruce Thomas Michigan Region Historian As the Historian for the Michigan Region of the Classic Car Club of America, and as a charter member, I was well aware of 2016 being our sixtieth anniversary and had recommended to various members of the board for a “Special Meet” to commemorate it in 2016.

I guess I shouldn’t have been surprised when I was asked to write an article on the sixtieth anniversary and I agreed to write something.  Trying to determine what might be interesting to current day members posed a problemand I finally decided to just write what came to mind as I reflected on the old car hobby and the CCCA in particular. I personally have always been a car nut and in the 30’s had an almost complete set of diecast Tootsietoy cars (still have a few) and when I was discharged from the Navy in 1946, I went to work at a car company, Chrysler, working on a Masters Degree in Engineering.  The training program involved three month assignments in various parts of Chrysler Engineering.  While I was working in the road test garage, two mechanics and I got the assignment of working on a 1933 Chrysler Imperial LeBaron Phaeton owned by singer Jimmy Melton.  He was a personal friend of the vice-president of engineering and we installed an incorrect white plastic steering wheel, a new exhaust system and incorrect overdrive transmission and did a general tune up on the car.  We always got to “road test” our mechanical work and we took the phaeton for a spin.  I fell in love with the car and that long, long hood and decided then and there I would have to have one. The old car hobby in those days was made up of various diverse groups which had interests in every conceivable old car.  The big car clubs, AACA and VMCCA, generally catered to cars of the 20’s and earlier and most people were “make-oriented”, like Ford, Dodge, etc.  Working for Chrysler, and having that brand loyalty, restricted my potential purchases, but I looked at many that were available through newspaper ads, word of mouth, etc., In 1953, a group centered in the New York metropolitan area, staged a CARavan to Detroit and a brief article in the local newspaper caught my attention, so I visited the Detroit meet site.  Of course it was the Classic Car Club of America and I joined on the spot.  I finally had found a club dedicated to the long hood, sweeping fender, high powered cars I admired.

In the national CCCA magazine, an article appeared in 1956, encouraging people interested in establishing a Michigan region to contact Frank Kinzinger, an attorney in Royal Oak, Michigan.  The first twenty five signers were the Charter Members (Photo 1).  By year’s end 100 members existed.  Oddly enough, the original signed charter does not exist in the archives.

We have scrap books of the early years of the club, but very few pictures exist.  The content is mainly flyers and a few pictures.  I have included a picture of my 1933 Chrysler Imperial which I bought in early 1956 (Photo 2).  It was a work in progress, as you can see, but it was already a family fun car. Family was one of the key components of the club initially and the Michigan Region meets were family-oriented with picnics, swim meets, car gymkhanas, etc.  My kids all remember the meets and the friends they met. Marg and George Hubbell, early club members and owners of a gorgeous estate near Milford, hosted many summer swim, game and picnic meets.  To the delight of all, George would run his enormous steam powered traction engine around the fields with all the kids putting out grass fires behind the vehicle.  When the children turned in their “fire-fighting brooms”, they each received a silver dollar. (Editor’s Note: the Activities Committee considered holding such an event, but concluded it would take another 60 years to get the required permits and waivers from the EPA, local fire department, child protective services, NLRB, state fire marshal and others). Marg was the first club historian and her scrapbooks cover the club’s early days. All the early members were acutely aware of the difficulty in finding people with similar car design ideas so we tried and were successful in getting write ups in Sunday supplements to the local newspapers to attract new members.  In trying to publicize the Classic Car Club, we had a great asset in Greenfield Village which then, and now, was a great gathering place for car hobbyists of all types.  Greenfield Village was very receptive to Michigan Region events.  These of course were publicized and brought new members to the club and gave us days of enjoyment at the village.  My children in particular, remember rides on the paddle wheel boat, the antique trains, horse drawn wagons, the chiming clock tower and various events. When the region got underway, we had some great meets which were largely subsidized by the meet organizer.  This caused people to shy away from organizing meets due to the expense it could entail.  Early on, we passed a resolution: you could not subsidize a meet. One early meet (which was subsidized) was in Grand Rapids on the estate of Dudley Waters, a charter member.  As I recall, at the meet, there were five Duesenbergs (the first time in years that many had assembled).  It was a simply glorious day.  Preston Tucker was there and for some reason I went for a ride with him in his Tucker.  He was trying very hard to get the Tucker classified as a Full Classic®, but, of course, that failed. As a long-time car collector, seeing the cost of vehicles then, as compared to now, is somewhat staggering.  Our classics in the early days were priced in the hundreds of dollars or less and were of course only twenty to thirty years old.  Restoration back then meant keeping the car presentable and drivable and hundred point cars were very rare.  Various wrecking yards were springing up in the east and far west of the country and were great sources of parts.  One of the charter members of the Michigan Region owned a Chrysler parts facility in Port Huron which helped me from time to time.  Most of our members were car-oriented and roadside repairs and owner restorations were the key.  We all have ‘crazy price’ stories, but a current one for me is the 1933 Imperial shown in an earlier photograph which is being auctioned this year with an estimated price between $700,000 and $900,000.  I paid five hundred dollars for it! I dearly wish the “paper trail ” of the early days of the club was less fragile, but I understand sometime this sixtieth anniversary year, we will try to make available, at a meet, some of the scrapbooks of the early years, not just the first. 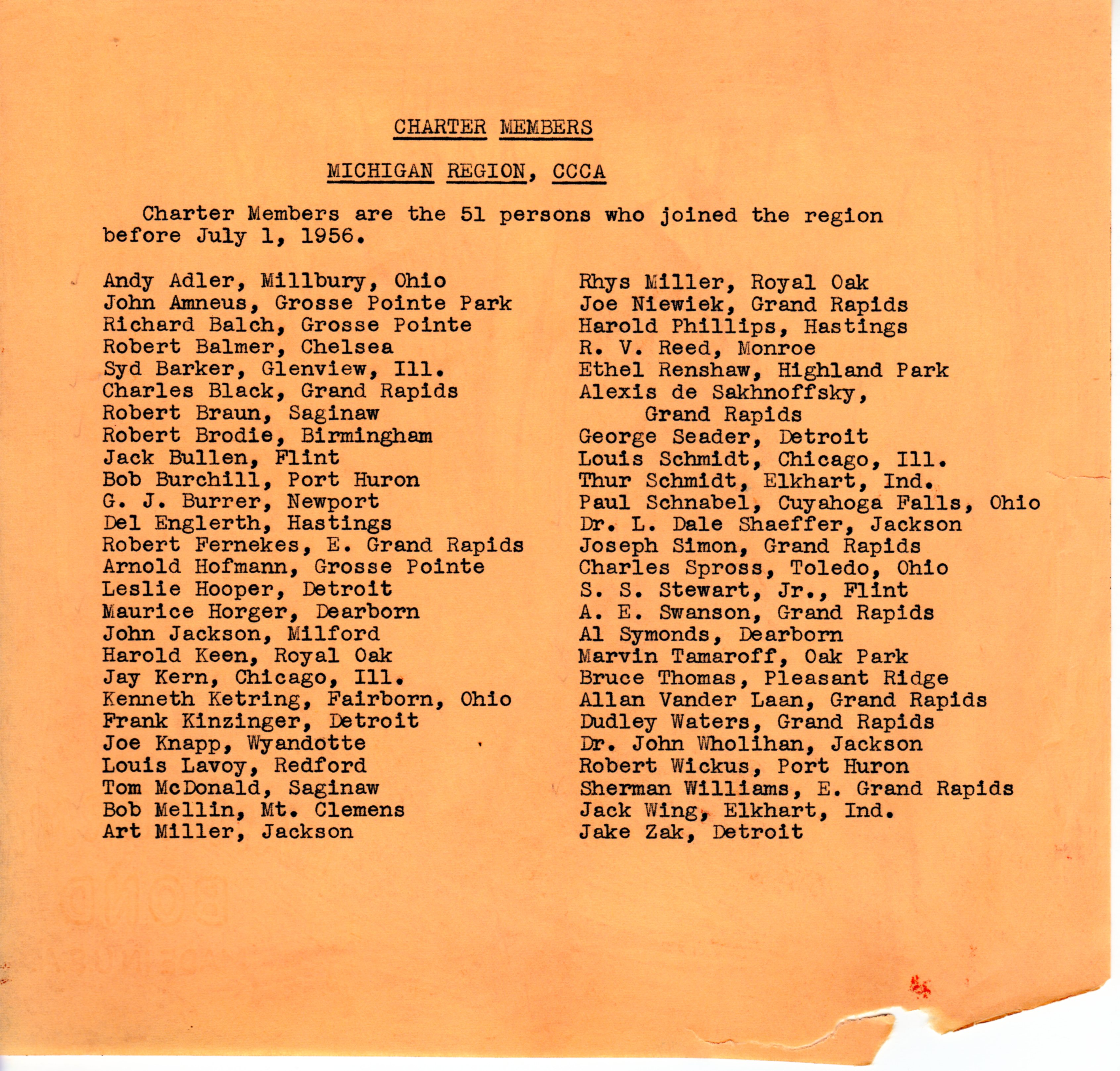 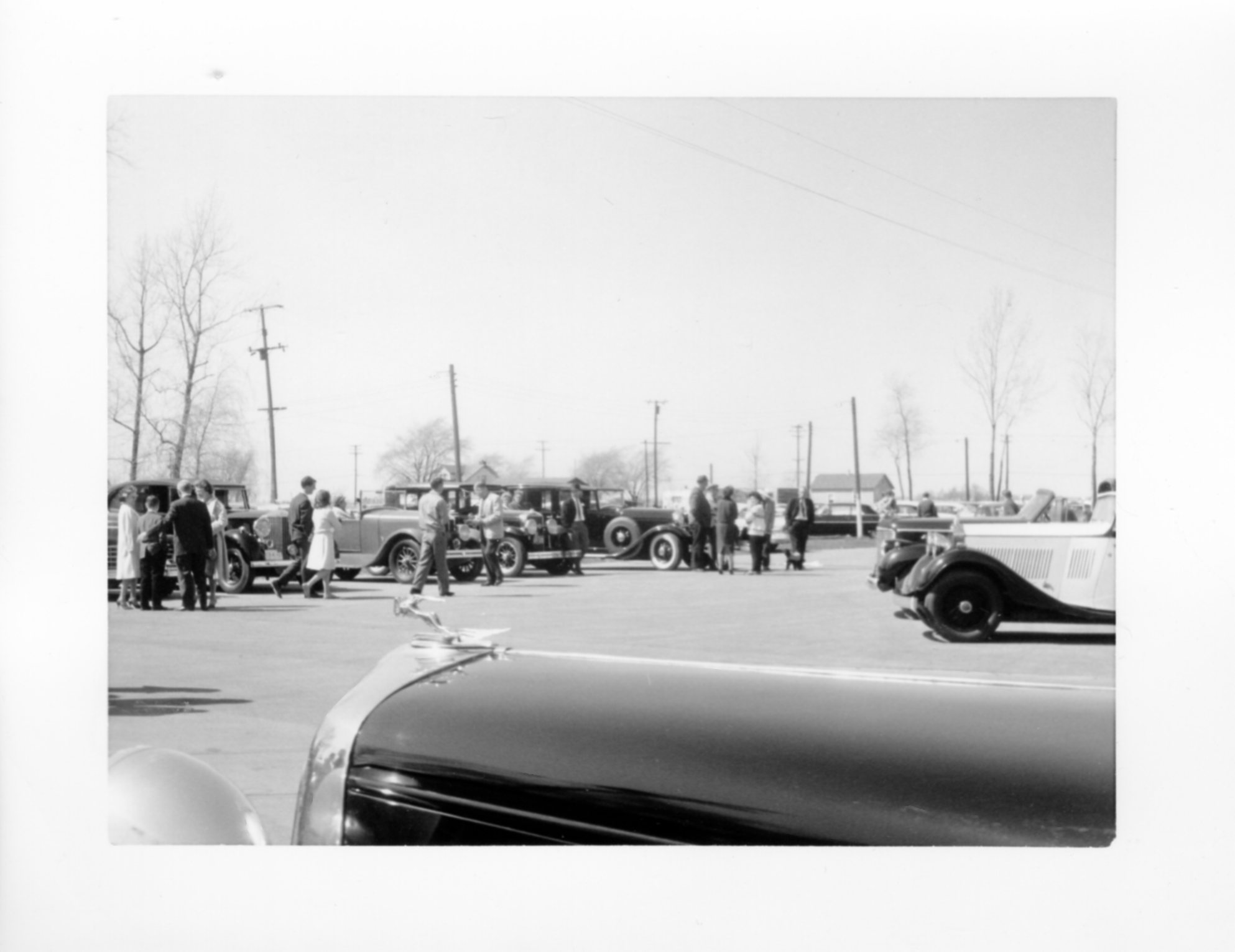