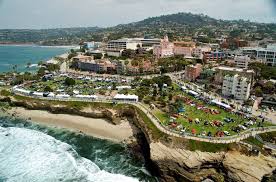 La Jolla Historical Society, a nonprofit that seeks to preserve and celebrate La Jolla’s diverse past, assumed the underwriting of the event. Trip Bennett, then vice president of the Society, appreciated the living history that the event provided and saw great value in incorporating the LJMCC as part of the Society’s mission. Bennett assumed the role of LJMCC chairman, an office he held until 2011. With Bennett’s leadership, the La Jolla Historical Society helped create the foundation necessary for the LJMCC to continue to grow and fulfill its potential.

In 2010, Spielman brought Mike Dorvillier into the fold to help the committee develop a stronger sponsor base and further secure the involvement of La Jolla’s merchants. Dorvillier stepped up to fill the role of chairman in 2011, and, along with event producer McFarlane, helped elevate the event to its current status as one of the world’s top collector car shows, according to Octane magazine.

One of Dorvillier’s meaningful contributions to the event came in 2012, when he changed the name of the La Jolla Motor Car Classic to the La Jolla Concours d’Elegance. Today, the Concours is filled with three days of world-class exhibitions and celebrations that inspire all who attend.